Here is an explaination of what gruit is from www.gruitday.com

What is Gruit Ale?

Centuries ago it would have seemed odd to consider using only one herb to spice beer.  Dozens of plants, such as bog myrtle, yarrow, mugwort, heather, and juniper were commonly used in ancient brewing, providing beer makers with a wide array of aromatic and flavourful options.  These beers were known as Gruit or Grut (German for herb), and a brewers’ spice blend was a proprietary and carefully guarded secret. However, after the Reinheitsgebot (Bavarian Purity Act of 1516) ordered that only hops were to be used to spice beer, and the Bavarian style of brewing took hold in most of Europe, the Gruit Ale gradually faded into obscurity.

Luckily, several craft breweries have rediscovered this ancient form of brewing. Craft brewing is based on the notion that beer should not be limited by the conventional norm – that beer should be about discovery and experimentation, and Gruit Ales are one of the best examples of this pioneering spirit.

The craft brewers who produce Gruit Ales have banded together to mark February 1st as International Gruit Day.  On this day, brewers and beer enthusiasts around the world pay homage to our brewing past and our exciting future as we rediscover the taste and excitement of this ancient libation.

My favorite beers I tried for the first time were (no particular order):

My Favorite beer events were:

Now looking back at my 2012 beer resolutions. Since I wrote them a year ago I never referred back to them and forgot most of them! I only fulfilled 6/13!

3. Visit The Blue Monk in Buffalo again. *sadly no

5. Continue to facilitate corporate beer tastings *yes I did this year! whoot

7. Read Last Call: Rise and Fall of Prohibition (which I bought 4 months ago!) *crap…no

8. Re-read Hops and Glory. *yes I did in England

10. Attend more beer dinners to expand my knowledge of food and beer pairing. *didn’t attend any in 2012

I have some work to do this year…and I’m looking forward to another great year!! Happy new year all!

Merry Christmas! Here’s a Guinness ad from the 1930s 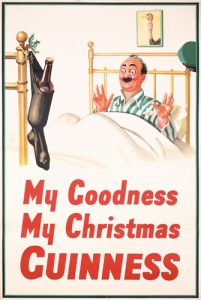 Westvleteren XII Saga – Was It Worth It?

So was all the drama over getting the rare Westveletern 12, the best beer in the world, worth it? In my opinion YES.

Here’s are my thoughts on the Westy Saga:

So that’s my take on it all. Just really happy I can share 4 bottles with others and give other people the opportunity to try the beer. And in the end I get 2 beautiful glasses and cellar a couple for me to enjoy at a future celebratory moment.

Here is the Toronto Star article about the Saga.

So here are my common answers to this question:

So there you go! For anyone wanting to get into homebrewing and has limited space, wants to experiment frequently I recommend a small batch size. Yes, it is too bad when you brew a great beer and it doesn’t last long, on the other hand you can brew it again, and perhaps find ways to improve it.

Here are some pics of my homebrew setup:

Collecting wort in my sink.

The Boil using a 2.5 Gallon pot I got from China town. 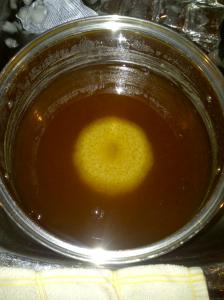 Wort, once chilled – effect of whirlpooling. 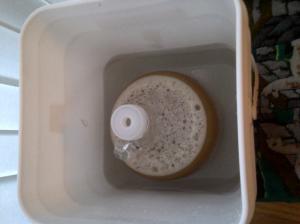 Fermenter in a plastic bucket of cold water (from my ice bath).

Fermenter setup wrapped in a t-shirt (note GLB devil’s 666 shirt!) blow off tube in sanitizer. The tube is replaced by an airlock after a few days.

A lot of people recommend putting your fermenter in a dark place. However, I’ve chosen to place it by the window because there seems to be a draft in the winter, which helps keeps it cold. This also happens to be the same place where the air conditioning blows, again keeping it cold in the summer. I put a black tea towel over the fermenter to keep it from the light.

homebrewing – how did I get here?

I’ve always said I have no interest in homebrewing, mainly because 1: I don’t like cooking and brewing is similar, 2: I don’t have the room, 3: I have access to great beer so why bother?

Last year I took the BJCP study group,  and met a ton of homebrewers. I’ve always liked listening to their stories, experiences and homebrew setups. Learning about brewing (which is what half of the study group was focused around) the idea really peaked my interest. Also I was one of the very few people in the group that didn’t homebrew.

I continued being fascinated about homebrewing. I would go to a friend’s house and see him brew beer and it looked so ‘easy’. And his homebrew turned out really nice. Earlier this year, I can’t remember where I specifically saw this, but I saw an advertisement for Brooklyn Brew Kit for $20 at Williams-Sonoma. So I thought, well why not try. The Kit has ‘everything’ you need and was specifically created for people who live in apartments/condos. The worse case is I lose $20 and half a day.

So the result of this experiment was….a disaster. As any homebrewer knows, temperature is one of the most important things about homebrewing. I didn’t hit any of my temperatures. Plus I used only the equipment and instructions they gave me, which was pretty basic. On top of that I didn’t really know what I was doing. Afterwards, the kitchen was a mess and I knew the beer would turn out horrible. Actually what was surprising, the beer turned out to be ‘kinda’ drinkable and not as bad as I thought.

After that experience I was determined to try again, because I hate being conquered! So I spend 2 weeks indulging myself in reading and researching homebrewing, talking to others about homebrewing and upgrading my set up. I bought another 1 Gallon fermenter, a auto siphon (which didn’t come with the kit), a digital fermenter, a 2 gallon mash tun and a hydrometer. I also ended up buying the Brooklyn Brew Shop Beer Making book (which I’ll review in detail in another post). So after buying a few ingredients I was able to try again.

This time….much better. I was much more prepared now that I had researched more about the process!

So now I’ve added homebrewing to my beer journey. There will be a few more posts including my setup this week!

Some important resources that I relied on and I recommend all of these for anyone who is planning on going down the homebrewing road:

1. Book – The Complete Joy of Homebrewing

2. Book – How to Brew. You can download a free copy here.

3. Forum – homebrewtalk.com. Basically any question you have about homebrewing, it’s been asked and answered here.

There is probably only one word to describe my experience at the Great British Beer Festival – overwhelmed.

As we walked in we headed to the Belgium section – mainly because it was right by the entrance. The first thing I saw was a cask of Cantillon!

There were beers from around the world. This year it was helped at The Olympia. The place was huge, but when we were there (during the day), it wasn’t too crowded.

The upper level had seating and we could easily get a seat. The only criticism I have is the food choices were lacking….However we did manage to find a thai food stand that had amazing spring rolls! And another food venue that had samosas.

For anyone wanted to go to the GBBF Festival I would recommend the following:

1. Do your research and select the beers you want to try or focus on a certain country – This is obvious for every beer festival, but I would stress it for this one! I should have done more research. I did ask some people who were more familiar with the European beer scene than I was, but it is still hard to narrow it down. Even the USA section alone was overwhelming for me – tons of breweries I haven’t heard of and sooooo many interesting beers.

2. As soon as you arrive get a drink (cuz it’s hard not to), then save yourself a table upstairs as your docking spot.

3. Similar to Mondial, go in the daytime during the week and leave by 6pm. Then it gets a bit crowded with the after work crowd.

4. Plan for multiple days at the festival – Do to our limited time in England and our busy schedule we only planned for 1 day!

Definitely have to go back!! Great festival, big space, not too crowded, with so may options.

We went back to London for our last few days in England.

We checked out a great pub in covent gardens called The Harp – highly recommend. It is a small pub that serves sausages. Unfortunately when we got there, just after lunch, the food had run out. Fortunately there is a small bakery/store 2 doors down where you can buy anything from fish and chips to several sandwiches and you can bring it back to the pub. And for the record, the steak and kidney pie was amazing!

Afterwards we went to Borough market to The Rake. The Rake is  small pub with a bunch of craft beers on tap mainly from UK and North America including…Sleeman Honey Brown! 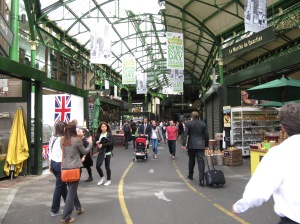 Just around the corner they also have an off license called UTO Beer.

We we’re having a party that night so we picked up a few beers.

Tagged as london, the harp, the rake

While out in the country, my husband decided to surprise me with a real ale beer festival! How I was unaware of a beer festival within my vicinity is beyond me!

We went to the Blackdown Hills Beer Festival, which was out in the middle of the countryside. There were 45 cask beers and ciders to choose from! Most from the West part of England, and some of the bigger breweries around England. I was really impressed with the selection! 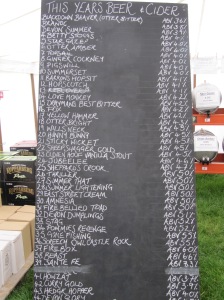 Oh…and when I refer to countryside I mean the countryside. What festival do you have someone dressed up as a cow serving you beer?